Over the years I have heard many senior coaches telling their students not to shoot anything other than what they are competing in. That used to be okay in the stone age when high schools and colleges did not have competitive clay target programs. Now a days that has all changed, and it does the athlete, and they are athletes, a disservice to only teach them or allow them to learn only one discipline.They should also compete at different events in and outside their state.

As these learning institutions are starting to allow athletes to compete in clay target competitions, after high school athletes may continue their sport in college (ACUI.org/claytargets). A few years ago a 3.0 gpa and a good trap, skeet or sporting clay average and some state, regional and national titles, earned an athlete a shooting scholarship. Now a days that has all changed, and it's more that a 3.4 gpa and an athletes needs to be good not in just one discipline, but good in all of them. So much so that it is becoming more and more important that these athletes be familiar or efficient in International Skeet and Trap. Case in point, Lindenwood University. Teams at times have been well ahead of Lindenwood after the American events. Then the boom is lowered in the International games. More and more colleges are realizing that they must recruit well rounded clay target shooters and ones who can hold their own in the International games. Just being good in American games might not land a scholarship. And just to be clear on this scholarship thing; the scholarships are academic scholarships, the shooting part is extra. The better the gpa,the better the scholarship.

I found this circulating on social media and thought that it might help clear some things up.

A recent chart has been circulating Twitter regarding Urban Meyer’s football recruits at Ohio State. I pulled the picture from @ohiovarsity, but I’ve seen it in many places already. At any rate, here it is: 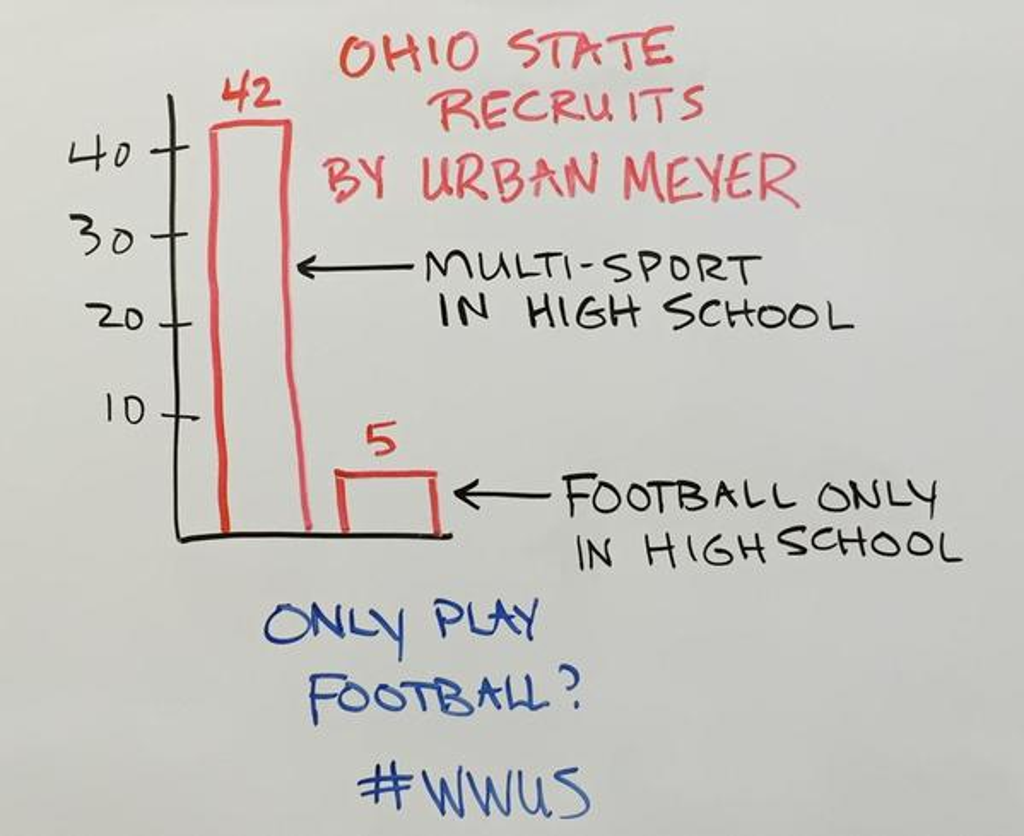 In my time as a multi-sport coach and AD at various sized schools, I’ve often heard kids who are dropping one sport in order to “focus” on another.

Every now and then I hear the argument that college coaches prefer kids to spend all of their time preparing for one sport. I agree that there are probably some coaches like that, but they are in the LARGE minority. More so than having acute, specialized, sport-specific knowledge, college coaches are interested in other aspects of high school athletes:

I love that this picture has gone viral, and I love that it comes from a major program. Multi-sport kids are important to programs at every level from DI down to D3. Think about it from a coaches’ perspective:

And I’m only speaking of sports that are offered in most schools, big or small. That endurance can come from soccer, cross country, swimming, or track. Hand/eye coordination? Not only from baseball or softball, but also from tennis, basketball, volleyball, and hockey. The ability to balance that

I mentioned for wrestlers? Also a huge skill for gymnasts. Change of direction? Basketball, soccer, tennis, softball, volleyball, and football. The examples are non-stop.

Outside of learning those skills and attributes across sport lines, how about being able to play for fun? As I’ve mentioned in a previous blog post (here), it’s extremely difficult to advance from one level to the next in any single sport. There’s a really good chance that middle school and high school are the last chances that athletes will have to play many different sports. If a kid enjoys playing a sport, middle/high school is the time to play it!

A quick search for multi-sport athletes will field a ton of examples and quotes. Here were some of my favorites:

“If a sport has a high point of the year, it must be the first week of spring. When I was growing up, I used to love this time of year. It was when I put my hockey equipment away and I was absolutely ecstatic to see the end of the hockey season. One of the worst things to happen to the game, in my opinion, has been year-round hockey and, in particular, summer hockey. All it does for kids, as far as I can tell, is keep them out sports they should be doing in the warmer weather. I could hardly wait to get my lacrosse stick out and start throwing the ball against the walls and working on our moves as we played the lacrosse equivalent to road hockey. All the good hockey players seemed to play lacrosse in those days and everyone of them learned something from the game to carry over to the other – things athletes can only learn by mixing up the games they play when they are young.” — Wayne Gretzky (pretty decent hockey player)

“The first questions I’ll ask about a kid are, “What other sports does he play? What does he do? What are his positions? Is he a big hitter in baseball? Is he a pitcher? Does he play hoops?” All of those things are important to me. I hate that kids don’t play three sports in high school. I think that they should play year-round and get every bit of it that they can through that experience. I really, really don’t favor kids having to specialize in one sport. Even here, I want to be the biggest proponent for two-sport athletes on the college level. I want guys that are so special athletically, and so competitive, that they can compete in more than one sport.” – Pete Carroll, USC football coach at the time of the quote, now head coach for the Seattle Seahawks

“Today, a lot of kids individualize in a specific sport. I think one of the things that helped me most was playing everything. I played basketball, I played football, I ran track. I even played soccer one year, [and] I played baseball. I think it allowed me to recruit different muscles [and] work on different things that I normally wouldn’t. And, it gave me a greater appreciation for the sport that I’ve come to love.” – Larry Fitzgerald, WR for the Arizona Cardinals

“The early teens are a difficult age because definitely you want your kids to grow up and do whatever they want to do; you don’t want to push them too hard in one particular sport. My parents allowed me to play volleyball and softball and basketball and soccer at one time and I loved it. I was playing all these other sports so it wasn’t too much wear on the soccer field and it wasn’t too much wear on a repetitive exercise.” – Alex Morgan, USA Women’s Soccer